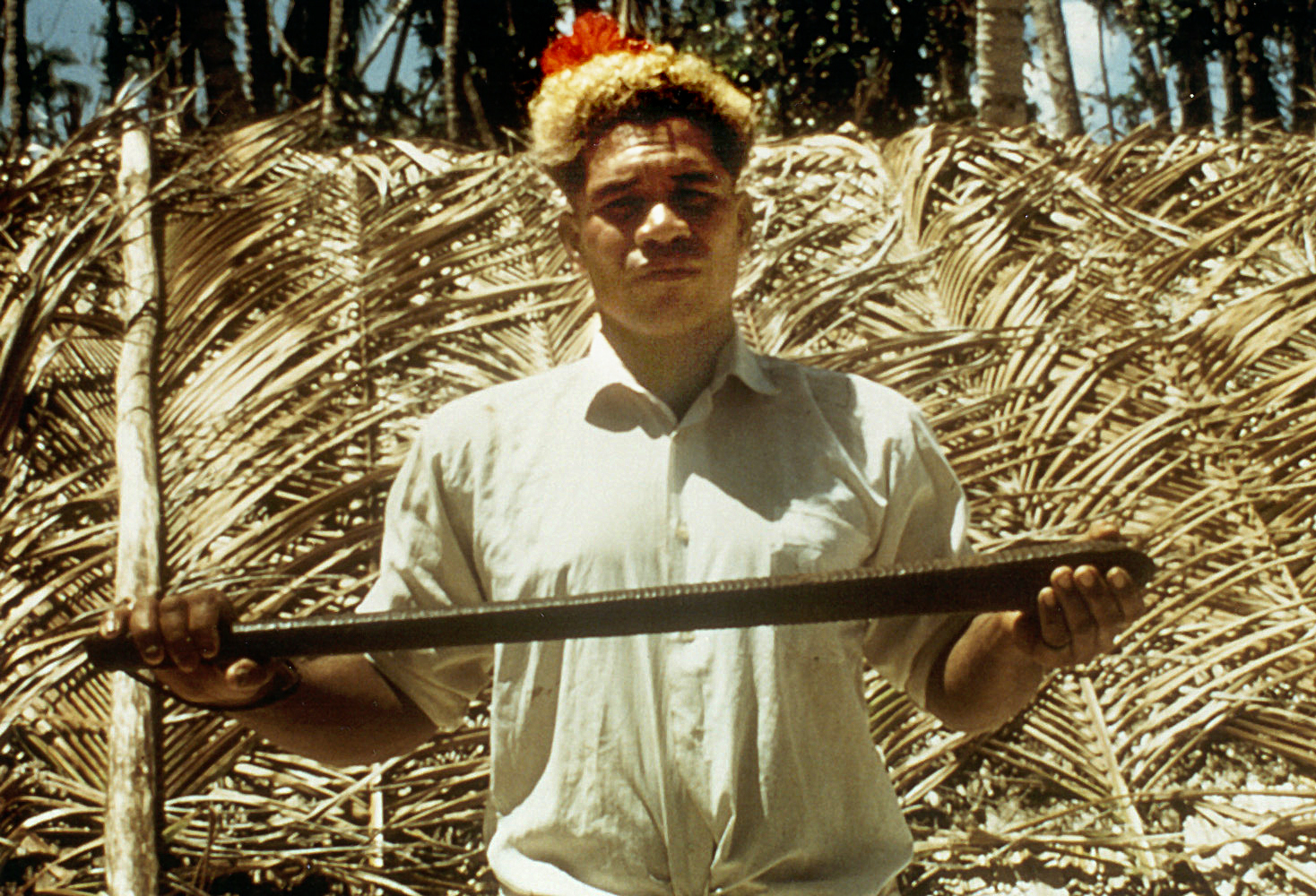 Anutans, like many Polynesians, have stories of how their island was pulled up from the ocean floor some time during the mythical past by the demigod Motikitiki (known elsewhere by other names, such as “Māui”). It is not known where Anuta’s first inhabitants came from, and Anutans know little about those who lived on the island until the time of Pu Ariki, who was an important chief from Anuta’s nearest neighbor, the island of Tikopia. From that time on, however, Anutans’ rich oral traditions record the island’s history in considerable detail, which we offer in condensed form here.

At some point during Pu Ariki’s reign the Tikopian chief voyaged to Anuta, where he spoke with the two indigenous chiefs. He told them of the storms, droughts, tidal waves, and famines he had come to know back home, but which Anuta had not experienced. When he heard that such events were unknown on Anuta, Pu Ariki cringed with shame and vowed his hosts would soon make their acquaintance. He returned to his homeland, invoked his deities’ assistance, and a short time later Anuta was struck by a horrific storm. Crops were destroyed, and a ferocious surf prevented the inhabitants from acquiring food from the sea. After the storm, the sun came out and shone unmercifully; the water dried up, and the people perished. These events allegedly took place about fifteen generations ago.

A short time later, two canoes sailed to Anuta. One is said to have been Tongan, and its crew was led by Pu Kaurave, the man who would become the first chief of Anuta’s current population. (Pu Kaurave’s war club was kept as a valued object long after the chief’s death, and is pictured in the 1972 photograph above, where it is held by Pu Tokerau.) The second was from “Uvea” (probably East ’Uvea or Wallis Island) and was led by Pu Taupare, the founding ancestor of Anuta’s present chiefly line.

Pu Kaurave and Pu Taupare married each other’s sisters and lived peacefully together for some time. Eventually, however, they came into conflict. Pu Kaurave left Anuta in search of overseas adventure, eventually landing in the Santa Cruz Islands. One version of the story states that he sailed to Taumako; another identifies the site as Vanikoro. In either case, he met his end when his hosts bathed him in “the chilling water.” Kaurave’s son, Ruokimata, accompanied him on the trip. Upon his father’s death, Ruokimata returned to Anuta and succeeded to the chieftainship, but he had no offspring of his own. Thus, when he died, Pu Taupare’s son, Toroaki, assumed the chieftainship, which has remained in the Uvean line from that time onward.

During this early period, more canoes arrived from Tonga and Samoa, and a few of their crew members settled on Anuta, adding to the population’s genetic and cultural makeup. Then, three generations after Toroaki, a man named Tearakura was chief. Conflicts developed, and Tearakura, his two brothers, and one brother-in-law eventually annihilated the remainder of the island’s male population. The Tongan and Samoan blood was retained through the island’s women, but since descent, inheritance, and succession to titles normally are traced through males, the non-Uvean lines forever vanished as culturally recognized entities.

Anutans regard this as a watershed event and refer to it as te taanga o te penua ‘the community’s extermination.’ The island’s four major subdivisions, called kainanga, are attributed to Tearakura and his three loyal supporters. The lowest ranking line would have died out within two generations had its representatives not been replaced by descendants of a man from Rotuma who arrived a few years after the great cataclysm. The Rotuman, Pu Raropita (also known as Keve), was incorporated into the fourth kainanga before its indigenous members had departed the scene, and the present Kainanga i Rotomua consists of his progeny.

Throughout its history, Anuta has maintained relations with its neighbor, Tikopia. Over the years, there have been wars and invasions, which the Anutans have always been able to fend off; there has also been a great deal of friendly intercourse. Each community has always included migrants from the other. Intermarriage has been common, and young men have looked forward to the voyage across 75 miles of open sea as a source of trade and adventure. The Anutan population thus contains great deal of Tikopian admixture. All persons on one island have kin on the other. The two islands’ languages are mutually intelligible. Their cultures and social structure are similar, and when the people of the two communities compare themselves with the rest of the world, they see themselves as closely allied. When Anutans travel to the central Solomon Islands—a practice that has become fairly common—they are confident of finding food and shelter either with other Anutans or with their Tikopian kin.

The first written record of Anuta’s sighting is from Captain Edward Edwards of HMS Pandora. He observed the island on August 12, 1791, during his search for the Bounty mutineers; and it is he who gave the place its European name “Cherry Island” (which is rarely used today).

During the 19th century, Anuta was visited periodically by European ships, mostly whalers and blackbirders—labor recruiters who, often by trickery or force, successfully induced a few islanders to hire out their services on terms advantageous to their employers. A man named Rangitauka is reputed to have reached the west coast of America, where he worked for several months; others found their way to Fiji and Australia, where they labored for the sugar industry. None of these men ever made the voyage home, but tales were carried back by Tikopians, a few of whom did manage to return from overseas.

Vessels of the British Admiralty visited Anuta in 1872 and 1875, mapped the island, and charted the local waters. In 1899 an individual protectorate status was proclaimed for the island, and during the early years of the 20th century Anuta was incorporated into the British Solomon Islands Protectorate.

According to Pu Nukumarere, a man generally considered during his lifetime to be the most knowledgeable on the island concerning matters of Anutan history, the church was established on Anuta in 1916. On May 16 of that year, John Wood, the Bishop of Melanesia (of the Anglican Communion), arrived with three Tikopian missionaries aboard the Southern Cross. The bishop asked the leading men for permission to establish the church, and it was readily granted. When he left, the Tikopians remained behind to bring God’s word to the local people. Spurred on by a devastating storm which hit in the same year, the population was soon completely converted.

During the 20th century, Anuta’s contacts with the outside world gradually increased. Beginning in the 1950s, the British colonial government attempted to send a local administrator once a year from the Solomon Islands’ Eastern District headquarters in Kira Kira on the island of Makira or the government sub-station at Graciosa Bay on the island of Nendö. Frequently, however, these trips were forced to turn back due to rough weather. (Even after one arrives at Anuta, high surf often precludes landing.) For contact between visits, Anuta had a small two-way radio.

In addition to government ships, other ships also began to visit Anuta with some regularity. The (Anglican) Church of Melanesia attempted to arrange annual visits by the mission yacht Southern Cross—a schedule which continues to this day, though it is often interrupted by rough seas. For decades the multinational Unilever company, which operated extensive coconut plantations in the central Solomon Islands, arranged biennial visits by a labor recruiting vessel. On occasion research vessels have also visited the island, as have several private yachts and, in recent years, a number of film crews.

When the Solomon Islands became independent in 1978, Anuta became a part of Temotu Province in the easternmost part of the country. Although independence has not increased the frequency or ease of transportation between Anuta and the rest of the country, the new country has gradually expanded its educational system, resulting in a larger number of Anutans leaving home to study, usually in other parts of Temotu Province and in Honiara, the national capital. A smaller number of students have had the opportunity to pursue higher education in Honiara and in Fiji. These students have helped build a small but significant community of Anutans overseas who maintain close ties to those living on the island and contribute greatly to developments there.